In his recently published 350+ page opus, author Michael Shellenberger tackles the daunting task of unpacking a multi-layered crisis that has reached a critical state in California’s City by the Bay.

For those who may not be aware, San Francisco, California is a city in the grip of a social, political and humanitarian nightmare. The decriminalization of illicit drugs and the massive adoption of progressive “harm reduction” policies have backfired, plunging the city into an epidemic of addiction. One resident, business owner Adam Mesnick, reportedly said, “What’s happening isn’t even liberal. It’s not realistic. It is an imaginary country. This is a serious addiction crisis that needs greater intervention or everyone is just going to die from fentanyl. 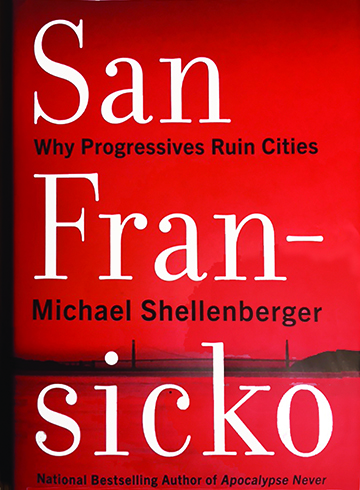 Shellenberger describes how homelessness and rampant drug addiction are associated with a statewide housing market that is grotesquely imbalanced. This is evident in skyrocketing rental rates and real estate values ​​that are costing many average citizens, even those working full-time jobs. The result is a population with a large percentage of ‘houseless’, ie ‘homeless’ people. In 2019, over 30,000 incidents of public defecation were reported in San Francisco, while California as a whole accounted for 51% of all homeless people in the entire United States.

Shellenberger exposes “harm reduction” sites and so-called “safe sleeping spaces” like the outdoor drug scenes they are. “Harm reduction” is a term used for government-approved areas that provide everything (in terms of equipment) an addict needs to successfully inject narcotics such as methamphetamine, heroin and fentanyl. NGO (non-governmental organization) workers provide drug addicts with tourniquets, cooking kits, syringes and needles in an effort to “reduce harm”. Shellenberger calls the practice what it really is – “damage induction.” These NGOs are the main drivers of the homelessness epidemic, disguising a sadistic addiction policy behind the auspices of altruism.

Shellenberger shines a harsh light on “housing first” which is the battle cry of many homeless advocates. This line of thinking advocates reducing access to overnight shelters and instead emphasizes housing drug addicts and people with mental illness without the need for sobriety, medication, and treatment. Shellenberger presents evidence that this policy does not effectively address the key issues that cause homelessness. On the contrary, by removing the treatment of mental illness and addiction from the equation, the problem spirals even further out of control.

Shellenberger goes to superhuman lengths to uncover, document, support and reinforce that the outdoor homelessness and drug scenes across the state are worsening despite taxpayer-funded spending on the issues being at a record high. The Homeless Industrial Complex, as absurd as it sounds, is very real and just as counterintuitive and dysfunctional as the title suggests. While hundreds of millions of public funds are siphoned off into this system, half of the money goes to staff salaries. It doesn’t take a rocket scientist to realize that if they fix the problem, the cash cow is essentially taken out of the milking parlor and put out to pasture.

San Fransicko also features an assortment of political abominations that add fuel to the fire. Specifically, the decriminalization of the possession and use of illicit drugs makes it easier than ever for traffickers to openly serve their market without fear of punishment. Meanwhile, the deliberate reduction in the severity of crimes such as shoplifting, burglary, trespassing, and grand larceny has created a black market industry that promotes criminal behaviors used to support addiction.

Shellenberger further demonstrates how an unaddressed mental health epidemic is not only a mistake in the civil duties of elected government officials, but their pledging on NGOs is downright irresponsible. The simple fact is that allowing people with untreated mental illness to openly and freely obtain and inject methamphetamine, fentanyl and heroin is by no means a solution to a very serious problem.

Shellenberger goes on to suggest a comprehensive treatment solution for the mental health crisis via a plausible institution he dubs “Cal-Psych” that would “effectively and humanely treat the seriously mentally ill and addicted, while providing housing for the homeless.” shelter on an emergency basis. system. The CEO of Cal-Psych would be best in class and would report directly to the Governor. Only in this way could voters hold the governor accountable for crises on the streets.

No one knows if Shellenberger will accept his offer to provide a plausible solution. Either way, if you’re concerned about homelessness, outdoor drug scenes, rising crime, and growing danger in your town, San Fransicko is required reading.

Michael Shellenberger exposes the flaws in a system plagued by addiction, psychosis and inhumane conditions.