When you think of San Luis Obispo County, people rave about the region’s more than 250 wineries. Wines & SpiritsThe Top 100 Wineries list for 2021 includes 20 California wineries, 10 of which are from the Central Coast.

However, the region’s distilleries are also causing a stir. Numbering less than 20, the small group packs a punch, with several award-winning establishments in its ranks.

Launched by Opolo Vineyards co-founders Rick Quinn and David Nichols, Willow Creek won gold medals in 2019 and 2021 at the California Craft Spirits Competition for its VS brandy and fig, cherry and of pear. VS, or very special, is a standardized industry designation for 2-year-old brandies.

Willow Creek also received double gold in 2019 for its Muddy Waters coffee liqueur – a collaboration with Coastal Peaks Coffee in SLO – and silvers for its Malt ‘N Oats whiskey and chamomile liqueur.

“He’s a bright, talented guy, and we give him a lot of freedom with the distillery,” said Nichols, who started making spirits with partner Quinn in 2013, before handing over to Quinn’s son, Paul.

“Over the next two years, I began to apprentice with former Willow Creek Chief Distiller, Paul Quinn,” Coulton said. “From day one, he had me pull out a notepad and jot down everything he told me about Fixed Ops and Opolo in general. It sets the tone for an immersive learning environment where, in my mind, being a sponge was not only expected, but required.”

As a former U.S. Navy and Cal Poly graduate with a degree in sociology, Coulton says he brings “a combination of mechanical aptitude and artistic and creative abilities” to the table.

“Through daily instruction [with Paul], I quickly gained a love and appreciation for the process,” Coulton said. “It’s a job that allows me to show off my best attributes, and it’s been incredibly rewarding. I eventually became Head Distiller in 2018 and took over as Head Distiller in January 2019 when Paul pursued another opportunity.

“I’m not a solo business, as I have my head distiller, Ron Panno, who runs the day-to-day operations with me. You’ve no doubt met him if you’ve visited the distillery. It’s hard to tell. miss him. He has a great work ethic, positive attitude and passionate about creating good minds,” Coulton continued.

“We value quality over quantity, and I would say he shares the same vision.”

Willow Creek’s long-awaited VSOP was added to its tasting menu in early January.

“This brandy comes from a small batch of 10 barrels that we fermented, distilled and aged with meticulous care,” Coulton said. “It has a sweetness and complexity that can only come from prolonged aging.”

Nichols added that the distillery currently only produces one whisky, Malt ‘N Oats, “but the long-term plan is to have multiple offerings available, including a bourbon, rye and a single malt.”

However, the main dish for Willow Creek is its traditional style brandy—French for “eau pour la vie” – a category of brandy that is distilled from any fruit other than grapes.

brandy is historically important in Europe and is called rakija in the Balkan. Rakija is the national drink of Serbia, the ancestral homeland of Opolo co-founder Quinn.

According to Nichols, fruit brandies available for tasting at the distillery include plum, cherry, fig and apricot. Grappa, an Italian-style brandy made from Muscat d’Opolo grapes, is also on the tasting menu.

The limited-edition product, which retails for $150 but is currently sold out, features a pear grown inside an empty bottle in the distillery’s orchard. At harvest time, the bottles are picked up and filled with pear brandy. 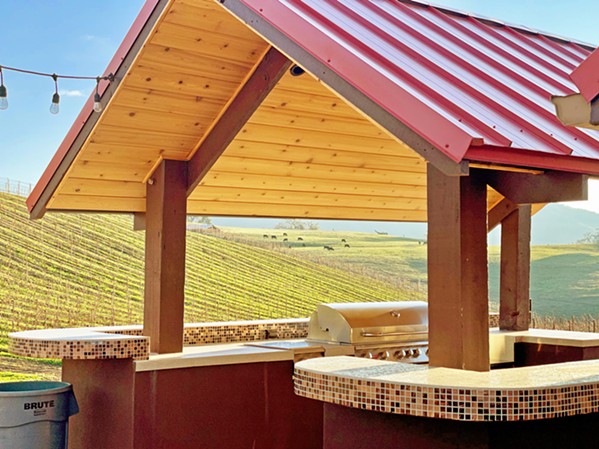 “The reason why small batch eaux-de-vie are a passion of mine is primarily due to the quality control and attention to detail that is unique to [their] production,”

His favorite flavor is plum, “because it’s tied to the Serbian heritage of Opolo and Willow Creek Distillery,” he added.

“Not only is it delicious, with notes of rich plum, vanilla custard, caramel and gingerbread spice, but it’s also a cultural experience. Slivovitz, as it’s traditionally called, is very close to the heart of a lot of “old country,” Coulton said. “To be able to participate in this part of history and culture through its production is really enjoyable and rewarding.”

SLO County has 16 distilleries producing brandy, whiskey, bourbon, gin, vodka, rum, grappa, liquor, and more. Twelve are associated with Distillers of SLO County, a nonprofit trade association that publishes an interactive map of distiller trails. Visit the websites below for more information on the 16 companies. Several tasting rooms offer tours by appointment only.